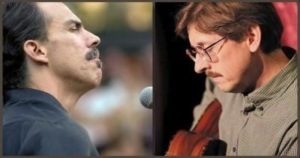 We’re kicking off our 2017 music series with a night of pan-Latin music, food and wine. Chef Lonnie will be preparing a special tapas menu for the evening that will include paella. Sangria and Malbec wines will be featured by the glass.

Grant Ruiz has played classical guitar from the age of ten and is now an active flamenco guitarist and teacher in Southern Oregon. He has studied in Spain and participated in many productions at the Oregon Shakespeare Festival. He is an adjunct guitar instructor at SOU, a board member of the Jefferson Classical Guitar Society, and a founding member of the ensemble Flamenco Pacifico.

Dan Fellman is a jazz guitarist who specializes in the music of Django Reinhart and his “Hot Club of France” group of the 1930’s and 1940’s. He’s performed with local bands Gypsy Rogue, Back Porch Swing, and the Djangoholics, and in duos with Ashland guitarist Ed Dunsavage and Portland-based guitarist Dan Balmer.

Together, Dan and Grant fuse their voices and approaches to create a pan-Latin sound, covering the music of Spain, Brazil, Argentina, Cuba, Mexico and more.